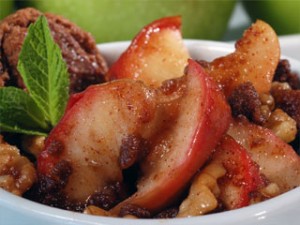 I’ve said it a million times and I’ll say it a million more: I LOVE FALL! It is, by far, my favorite season and I’m obsessed with everything about it. One of the greatest perks about Fall is that apples are in season! When I lived in Buffalo, something I would look forward to all year long was going to the Mayer Brothers Cider Mill

. It’s such a cute little seasonal shop that sells apples, cider and sweet local treats. It attracts many a Buffalonian when the weather starts to cool. Lately, I have been making an easy homemade Apple Crisp to remind me of that special place back home. Here is the recipe!

Cut one apple (gala’s would probably work the best)

Crumble up a few ginger snaps

Add all ingredients to a bowl, mix together and microwave for about 1 1/2 minutes.

It’s really delicious and makes a great low calorie snack. Sometimes I just heat up a sliced apple with cinnamon and call it a day. The ginger snaps just add more of an apple pie flavor. I hope you are enjoying the season! OMG OBSESSED!